The Carré Theater and the Unknown Canal

The Royal Theater Carré is a stately theater on the Amstel, the river that gave Amsterdam its name. It’s where Porgy and Bess introduced the Netherlands to musical theater. Stars like Josephine Baker, Harry Belafonte, and Nina Simone played the Carré. King Willem-Alexander entertained Nelson Mandela and Devikarani Priscilla Jana at the Carré. Ramses Shaffy (whose popular music chronicled the country’s turn from post-war malaise to joyful rebellion) and Jos Brink (the Dutch Noel Coward whose frank discussion of his faith and sexuality paved the way for gay marriage) both lay in state at the Carré.

The 19th-century Romantic white edifice has a place of pride in the annual Liberation Day concert. The May 5 event is a national celebration marking the end of Nazi occupation. The concert stages are set up on the river itself, with the Carré as both staging ground and picturesque backdrop. The King and Queen walk along a red carpet from the Carré to the applause of more than 20 times the Carré’s capacity lining the river and bridges. Polite, even restrained, applause. This is the Netherlands, after all. 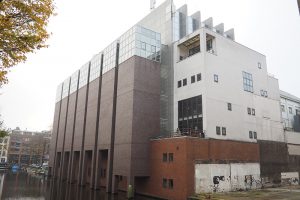 The back of Carré is nothing like its majestic front. It’s concrete and red-brick Brutalism next to a small concrete lot and an even tinier canal. Stage doors are usually modest, sometimes hidden in an alleyway where cast or crew members sneak outside for a smoke or a moment alone. This building appears to have no exit beyond two balconies, each no bigger than the inside of a four-seater car, overlooking a canal so short it exists just for the length of the Carré and its neighbors.

Sometimes, you can see them on the balconies, the people who make this palatial theater run. Techies across the world look the same. Actors tell themselves stories of their glamorous lives in the theater, but techies know they’re addicted to something less destructive than drugs and harder to shake than love.  They move with the ease and weight of that unsparing and unsentimental knowledge. When their curtain falls, they will not lie in state in the theater, but it could not exist without them.

The name plaque for this tiny canal is hidden by ivy, but in the winter, you can see the discreet blue rectangle saying: De Onbekendegracht. The canal that the theater’s anonymous support look at as they smoke is called “The Unknown Canal”.