I passed through the castle gate behind a fairy and in front of a pirate. The sprawling pleasure garden that rolled out before me was dotted groups chatting, drinking, and – of course – posing for pictures. A steampunk couple passed a bottle to characters from a manga. A man in heavy looking plate armor used an iPhone to snap photos of a beautiful redhead with long flowing ringlets and an early sixteenth century gown. Walking slowly down the wisteria-trellised path to the drawbridge was Boba Fett.

Despite the movie backlot feel of this wild array of genres, the castle itself was real. To my American eyes, it looked like something out of a fairytale, but its story actually forms a neat summary of the area’s history. Some version of the castle has existed since the 14th century. It’s been destroyed several times, first in fighting between its medieval overlord, the Bishop of Utrecht, and the count of nearby Holland, then by successive wars with the Spanish, English, and French. A 19th-century Rothschild heiress married the man who owned the ruin and, with the help of the architect of the Rijksmuseum, restored the castle – in between her motor racing and love affairs with French women! It spent the 20th century hosting the jet set before being handed over to a 21st-century foundation.

The latter is how this former military fortress is now home to the largest outdoor costume festival in Europe. The sprawling castle grounds hold themed villages from pirates’ cove to water world to mystery mile. Every manner of fandom is welcome to this cheerful blend of mythical history and history myth. Master armorers and traditional folk singers set up next to Ye Olde Pubbe and jewelers crafting fairy princess crowns. The few facts floating on the sea of storytelling look like accidental tourists pushing against the crowd of Times Square.

It’s an appropriate metaphor to leap to my mind, as I first discovered Elfia when I was wrapping up my life in New York. It was an exhilarating and terrifying time. I had realized that theater, which I’d been doing since preschool, didn’t make me happy anymore. Although I had fallen desperately in love with New York when I moved there at age 22, theater had become the last thread tying me to the expensive, angry city. Meanwhile, my partner had finally figured out how to achieve his dream of moving to Amsterdam, so it made a sort of sense to rebuild here.

This idea of rebuilding seemed too big to look at directly. I could see pieces of it, like finding a new career and learning a new language, but my mind blessedly refused to take in the enormity of what we were doing. There’s no bliss like self-imposed ignorance. I knew I would miss my friends and family, but I couldn’t imagine what my life could look like if I wasn’t doing theater or living in New York. I was looking up Dutch history out of some vague notion that I could keep writing about women in history when I stumbled across the site for Elfia.

It was the first time I realized that I was moving to a country with real castles. Like American soccer fandom, my reaction to castles is one of those things that is difficult to explain to Europeans. Here, they are familiar relics of a still-present past. The feelings they evoke vary by local history and personal political persuasion. The Netherlands doesn’t have its neighbors’ fond nostalgia for the medieval, so here, they’re largely rich people’s houses that may or may not have been turned into museums. What you think of them depends on what you think about the museum or your local wealthy family.

For me, however, castles are the setting of dramatic stories, imagined or otherwise. A castle hall may be where Hamlet fought a duel with poisoned swords, but it’s also where Henry VIII met Anne Boleyn and Jacoba van Beieren started her long struggle to inherit Holland. The cover of my favorite childhood book featured a princess climbing down the wisteria of a castle tower. I spent my last years in New York writing about the women of the 100 Years War and the War of the Roses, both of which relied heavily on the seizure of castles.

Due to the cost of international travel from the US and the scarcity of American vacation time, I could count on my fingers the number of castles I’d seen before I moved to Amsterdam: the Louvre, the Tower of London, the Alhambra, the Palacio Real, Hampton Court, Buckingham Palace, the Castle of Good Hope, Maccu Pichu, and Cuzco’s Hatunrumiyoc. That’s more than most Americans see in their lifetimes, but I’ve more than doubled that amount in the few years I’ve lived in Amsterdam.

This was one side of the possibility I glimpsed when I read that post about Elfia back in 2017. The other was a promise of wonder and creativity. Ever since I was a child, my senses of curiosity and storytelling had been channeled into theater. I had defined these fundamental parts of myself solely by theater: I was a theater artist. I had never realized that theater was merely a channel for these traits, not their source. This old-fashioned website of an event that looked like a cross between Comic Con and a RenFaire gave me hope that I would find new creative outlets, all while enticing me with the promise of living alongside history.

Five years later, I finally walked through the festival gates. I’d been delayed first by logistics, then by the pandemic. By the time I walked through the gates of Castle Haarzuilens, I had developed a career writing and telling stories, as well as a life full of wonderful people from all over the world. It was a beautiful festival of music and imagination, but I spent the day more grateful for the hope it had given me to leap into the unknown. 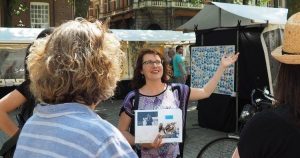